Hello everyone!  This is a guest post written by Ron Fritzke.

Have you ever noticed that the techniques used by people pushing the limits of human performance are often later incorporated into the public consciousness…benefiting just about everyone?

Some of the innovations used by the astronauts come to mind. Everything from various water filtration strategies to what is now known as ‘PosturePedic’ mattresses had their roots in the NASA programs.

What was previously cutting edge technology is now part of everyday living.

Along these lines, there’s a style of exercise that runners, cyclists, and swimmers have used for decades, and it’s now being recognized as one of the best ways to maximize the exercise component of a healthy weight loss program.

Just to remind you, merely cutting back on what you eat without incorporating an increase in exercise is not conducive to the type of weight loss that is sustainable…or for that matter, healthy.

The style of ‘cutting edge’ exercise I’m speaking of is called High Intensity Interval Training (HIIT), and while it’s been used since the 1950s by long distance runners, it’s only now being used by those seeking to lose weight.

HIIT is different from cardio training.

Rather than filling up your exercise time moving at an effort that can be sustained for the entire session, HIIT consists of alternating hard efforts – far above what could be endured for much more than a few minutes – with ‘rest’ intervals.

Before we go on much further, I’ll include the obligatory warning to consult your doctor before initiating any exercise program.

And you know what?

Because High Intensity Interval Training is much more of ‘shock’ to the system…the warning has more merit than ever before.

Here’s An Example Of A HIIT Workout 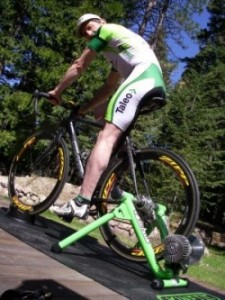 I’ll use a workout performed on an indoor bicycle trainer as an example of a HIIT workout:

That example would be categorized as a ‘pyramid’ style workout. There are variations of the same type of workout…if you’d like to leave a request at the end of this post, I’ll be happy to supply a few more examples of HIIT workouts.

Let me give an example of the benefits of using HIIT for losing weight by relating some personal experience in my transformation from a competitive runner to an everyday exerciser.

When I was running upwards of 120 miles a week, keeping my weight down wasn’t much of an issue. There was a lot of volume in my training, but there was also a good amount of high intensity intervals.

After transforming myself from ‘crazy long distance runner’ to ‘normal citizen’ I noticed that my weight was migrating upward, even though I regularly ran 5 to 10 mile runs.

It wasn’t until my kids started competing that I discovered the magic of intervals for weight loss. I joined them in running very high intensity hill repeats (nearly ‘all-out’ up a one and a half-minute hill, followed by an easy jog down…repeated somewhere between 6 to 9 times).

Here’s what I noticed…my heart-rate was elevated 20 to 30 beats per minute for hours after the workout, indicating a metabolism that was burning up body fat for much longer than the workout itself.

And the bottom line? My weight started slipping downward.

So there you have it. A short primer about High Intensity Interval Training as a very effective means to maximize your exercise efforts.

Not only will you be burning calories while you’re working out, but you’ll also be burning up those chocolate chip cookies for a few hours after you get off your feet.

About Author: Ron Fritzke reviews cycling gear for his website, Cycling-Review.com. His latest focus has been on indoor bike trainers. A former 2:17 marathoner, he now directs his competitive efforts toward racing his bike and looking for good cycling products.