You are here: Home / Diet & Nutrition / A vegetarian diet does not need to spell disaster to your health 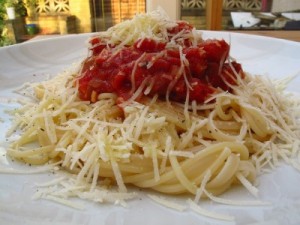 This is a guest post written by Paul Darlow.

Yes, you did read that correctly.

The person writing it seems to be implying that not only could eating a vegetarian diet spell disaster to your health, but also that there is a general pre-conception out there that this indeed would be the case.

It’s strange, isn’t it, what some people think of vegetarian food?

What makes the above comment all the more worrying is that it was written and published by the Nutrition Team at Tescos Diets – one of the newest yet fastest growing (and most highly rated) diet providers in the UK.

I stumbled across the comment whilst undertaking a review of diet providers for my website – as part of which I decided to try each of the recipes that were suggested as appropriate for dieters.

The recipes offered for vegetarians seem to be either:

Now, I have nothing against a good curry, especially those true to real Indian home cooking, but it shows a distinct lack of interest and knowledge of vegetarian cooking when that’s the only acceptable recipe that you can write.

The only exception I have found so far is Slim-Fast’s recipe for Pasta Arrabiata. Granted, the recipe is a bit of a classic and so they’d be hard-pressed to ruin it, but I’m always happy to see simple, classic recipes on the menu. The following makes 4 servings:

Hopefully in the next few weeks I will find some slightly more original tasty vegetarian recipes suggested by the diet companies. I must admit, though, that I’m not optimistic!